The watcher of the “autopark” was a man in his 60ies named Cengiz. With barely 3 visible teeth in his mouth, he could not speak a single word in English and could not even comprehend simple words like “OK”. So I was sitting there, a lone “Ermeni” who had just crashed his motorbike, in this booth somewhere in Erzurum with this Turkish man who I could not speak a word with, my Mastercard being declined and my right knee hurting because of the impact. A pretty fucked up situation, or so I felt. I went to check my motorcycle for the damage. The throttle grip was broken, the left mirror smashed, the clutch lever and the headlight metal twisted, the front left turn signal broken. There was, however, good news — the engine started fine, and there was no leakage. I just could not ride it because of the broken throttle grip. We walked back to the booth. “Su?” asked Cengiz. Not knowing what that meant, I suddenly realized I was extremely thirsty. “Water”, I said. “I’m thirsty!”. “Su, su!” Cengiz opened the fridge and handed me two bottles of cold water. “Su” meant “water”. I will never forget. 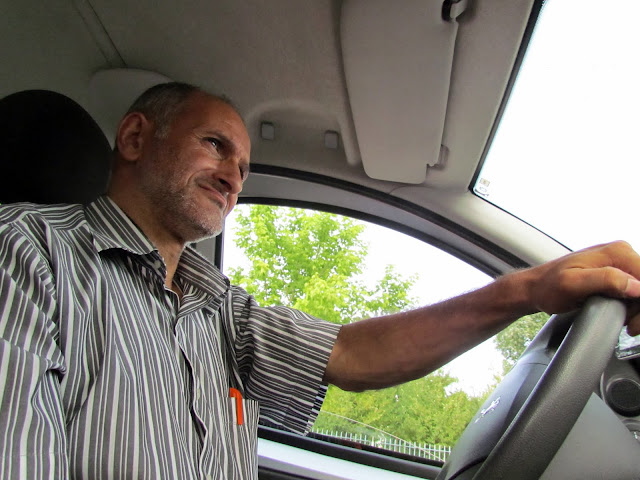 He then turned on his old PC, fired up Internet Explorer with a bunch of stupid toolbars and yelled — “Internet!”

That sounded so right!

Google Translate took over from that point. Cengiz asked my name, asked me about my job in Armenia, gave me a thumbs up about being a programmer, then started calling to places and looking for Honda Repair shops in Ankara and Istanbul. After 2 hours of searching and calling, we could not find anything. I started getting hopeless again. “Yemek?”. Yemek means to eat. Cengiz suggested that I check into a hotel, eat something and call him tomorrow morning: “yarın!” He then walked me into a hotel called “Kral Hotel”, bargained a price for me at the counter from 100 dollars a night down to 50, carried my luggage all the way to the room, refilled my phone credits for 25TL, gave me his number and disappeared.

I took a shower, changed my clothes, and walked out to try and find something on my own. Now here is a useful traveling tip: nobody, I mean NOBODY speaks English in Erzurum. Although a pretty vibrant town, the society itself is very “traditional”. People do not speak anything but Turkish, and because of Ramazan all restaurants and eating places are either closed, or completely empty before 7:30. Nobody eats anything. So I tried my luck with “I’m sorry”ies and “Excuse me”ies and even “Hi”s, but nobody would even respond. And then, through trial and error, I met Uğur, fitting a carpet with a friend into a small red Opel. He had a backpack, and it somehow looked as though he could speak English.

“Do you speak English?”

Yay! 5 minutes later Uğur and his friend Ibrahim were driving me in Ibrahim’s car to the motorcycle repair places in Erzurum. Ibrahim couldn’t speak English but he could understand the word “OK” and nod. After seeing some shops I started worrying about troubling the fellows too much.

“Aren’t you busy? I don’t want to take your time!”

“No problem my friend, we help you and then we go!”

Uğur and Ibrahim were in the Turkish Air Force. Ibrahim was a pilot, Uğur was an air traffic controller.

“You look like a turk, but you are not a turk!” he laughed. “That means you are Ermeni! Similar face like brothers! Kurds more different face!”

After talking to many different mechanics about my motorcycle’s broken parts, Uğur and Ibrahim decided that it was best for me to go to Istanbul.

“But I need to take my motorcycle with me! How will I fit it into a bus?”

“Dude, my motorcycle weighs 200 kilos and is pretty wide, it is no bicycle!”

“Kawasaki 1200cc in bus OK? Your motorcycle bigger than Kawasaki??”

“We take you bus station now.”

The bus station was somewhere in the outskirts. The two friends walked to one of the company representatives, and started explaining my situation in Turkish. The driver didn’t even want to hear about taking a motorcycle on a bus. Uğur and Ibrahim were, however, persistent. Along the conversation I heard the word “Kawasaki”. The bullet argument. The bus driver gave up, opened the luggage compartment and asked me if the bike would fit.

“How much?” I made a money gesture to the driver

“OK,” I told the driver and gave him a thumbs up. “Do we leave now?” I asked Uğur. He looked annoyed.

“We now bargain the price. Give us time my friend.”

After about 10 minutes of talking really loud, Uğur turned to me.

“You never say OK to price!” he smiled. “No forget! We take you to otel now? What you wanna do?”

“I have taken so much of your time! I insist that I take you guys out on dinner! What do you say? You can’t say no!”

“OK! Can we take Ibrahim’s carpet to his home first?”

“Sure, where does he live?”

“It is near, military base!”

I shut the fuck up.

Something has to be said about the Turkish military. There is a huge lot of military bases all over the place — inside cities, towns, and along the highways. They are easy to recognize because the walls are painted a specific orange red. There is always an armed soldier guarding the entrance. Sometimes the soldier runs out and raises a flag, if the base is on a busy street. That stops all traffic and you can see tanks or Land Rover vehicles with NATO marking driving in and out. The military have a lot of respect in the public, and they look kinda different: always in good shape, hair done, the “charismatic alpha” kind. Uğur told me the military have more respect than the police. “First soldiers, then jandarms, then police.” I figured that with so many bases and so much respect in the society, whoever controlled the military would have an immense control over Turkey’s internal politics. I insist that it must be so, even if it is not.

Nobody stopped our car. Ibrahim and Uğur took the carpet up, and came back with Ibrahim’s mom.

We went to a restaurant somewhere downtown, and talked about almost everything for an hour, from sex to PKK. Uğur was asking a lot of questions.

“You have a girlfriend?” he asked

“What do you mean by a girlfriend?” I wondered

“Someone you want to marry all your life but you have to wait because you can’t marry now!”

“No, I guess I never had a girlfriend on those terms!” I laughed

“Oh, Why no girlfriend? I have a girlfriend! We marry next week!”

“Do you know dolma?”

“Yes, stuff! Something inside, stuff!”

At exactly 7:30 the food started coming. We had excellent meals: roast lamb meat, borek with cheese, cutlets and kebabs followed by dessert. I asked for the bill. The waiter got ridiculed.

“But I insisted that I pay!”

“It is free. Food is free. It is Ramazan! Everything you eat free!”

We then walked around the town, they helped me exchange my dollars for liras and that is when I realized I had not spent a single dollar whole day except for the accommodation.