“Are you gonna see the cocks?”
—Adem

The initial plan was to head from Ankara to Nevşehir. I rode out and arrived there after a couple of hours, but the city looked so faceless and boring, that I decided to ride on and see where the road takes me. After a little more than 10 kilometers and passing a small mountain range, suddenly an extraordinary sight opened in front of my eyes! 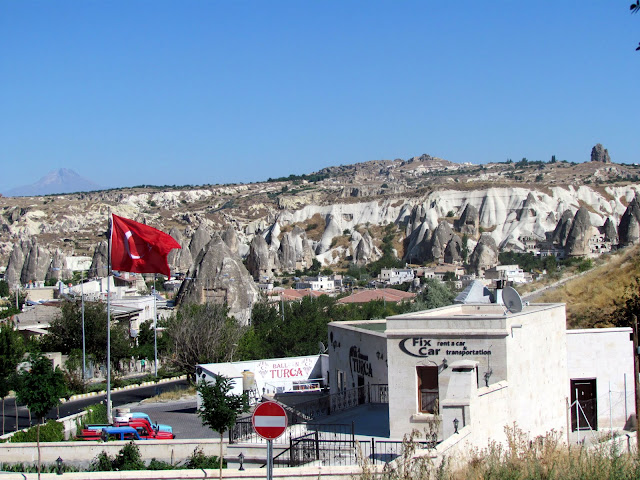 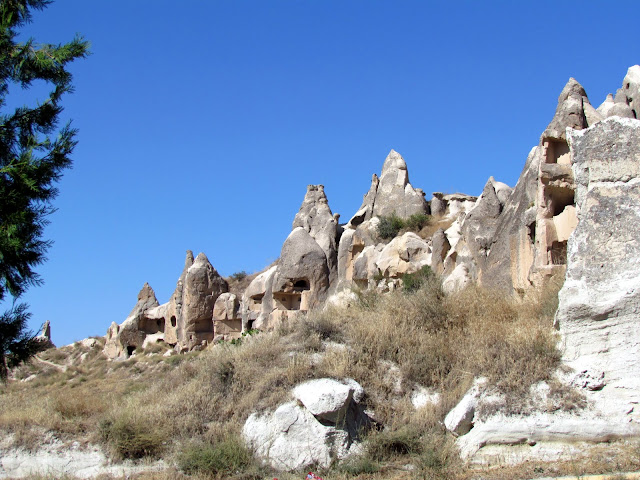 Seriously, unfortunately I cannot shoot photos in a professional way that will grasp how immensely beautiful this place was! It is something you should see for yourself! 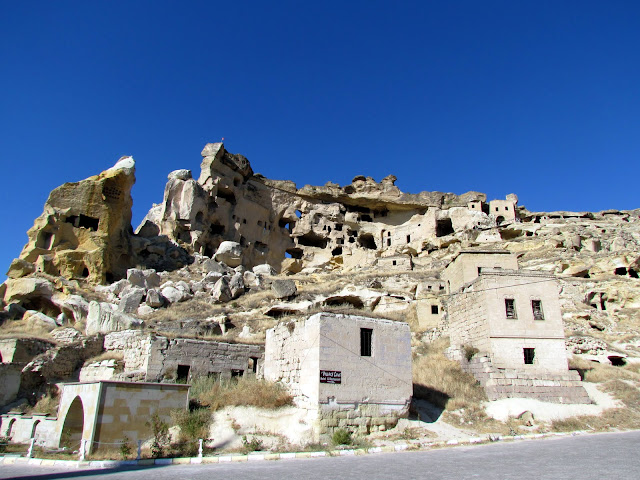 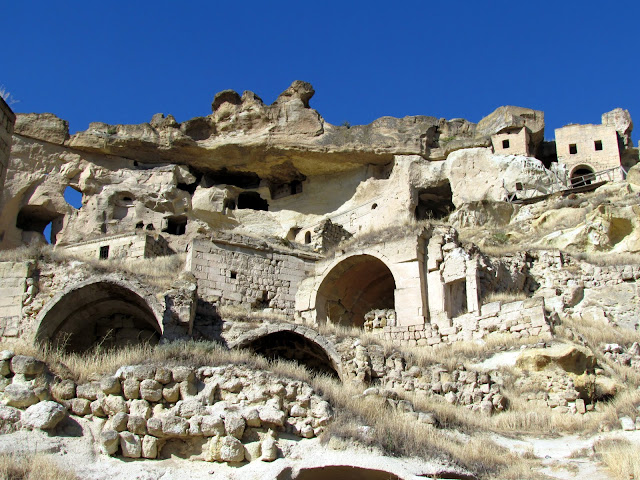 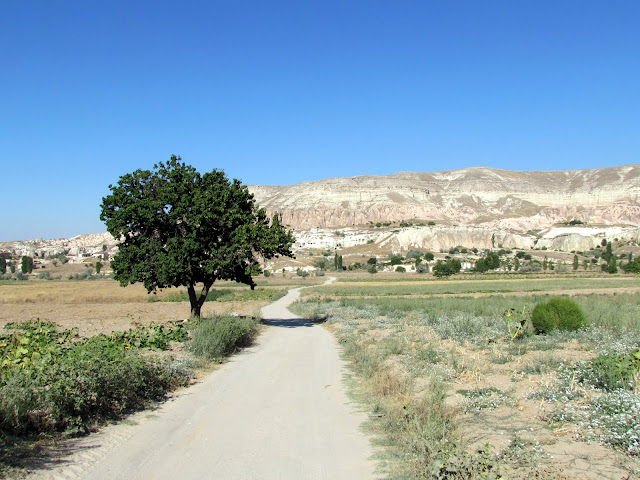 I checked on the map, and it said “Göreme”. OK Göreme, I will stay here! I rode into the town (passing camels on my way!), rode by a number of small cave-carved hotels until I came across the one that had a 450cc KTM parked in front of it. The name of the hotel was “Nomad”. Sounds about right! I walked in. The receptionist’s name was Adem.

“Think you could go down for me on that?”

“OK!” he registered me hastily, and opened a small pocket map of Göreme. “Do you know what you’re gonna see here?”

“Are you gonna see the cocks?” he looked very relaxed, so for a brief moment I figured he meant the birds. “I mean, the penises?” he added. There’s no way out now.

I swear to God, even though the hotel itself is crap, it is completely worth to get the experience of getting a man you met two minutes ago to ask you if you are gonna see the cocks, and then quickly clarify that he actually means the penises.

“Which penises?” I inquired

“The ones in the Love Valley!” he made a circle on a particular area of the map with pen and wrote “L. V.” — “Love Valley!”

“What are these… penises?”

“They are strange rock formations. Everyone loves to see them! Some of them here” — he marked another part of the map — “have three heads!”

To say that it was an awkward situation is to say nothing. “Are they far away?” I asked

“Not so, but it is better if you take a bicycle. Go to Silk Road Bike Rent. Tell them Adem sent you. They will give you a good deal!”

Silk Road Bike Rent was around the corner. Some boy who looked 15 managed the place. 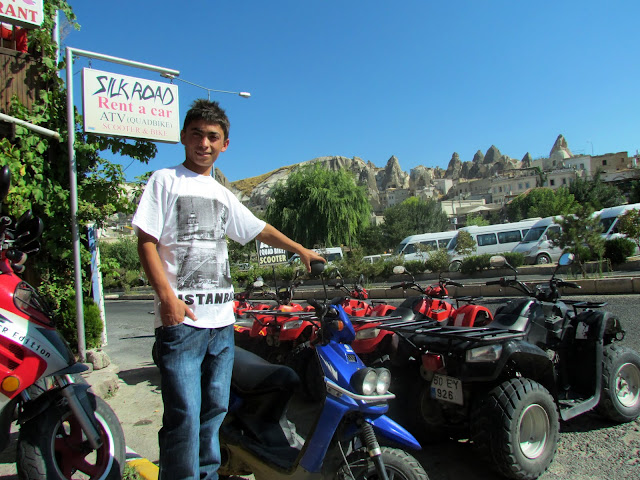 “Hi, I’m Areg, I want a bicycle, Adem sent me!” I quickly threw sentence after sentence.

“Adem? Tamam. I can give you a good bicycle for only 15 liras for 6 hours. Normally this would cost over 20”

I took the bicycle and went out to find the “penises” in the “love valley” that “everyone loves to see.”

After some wandering around, I found some trail and started following it. Soon I have noticed a strange stone with markings that I recognized — “L. V.”, and an arrow. 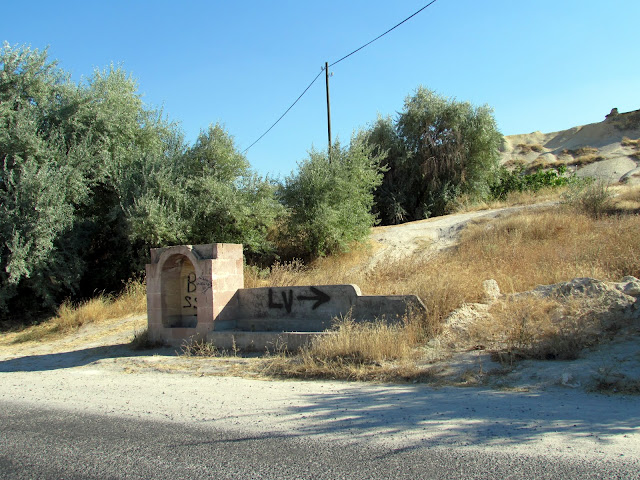 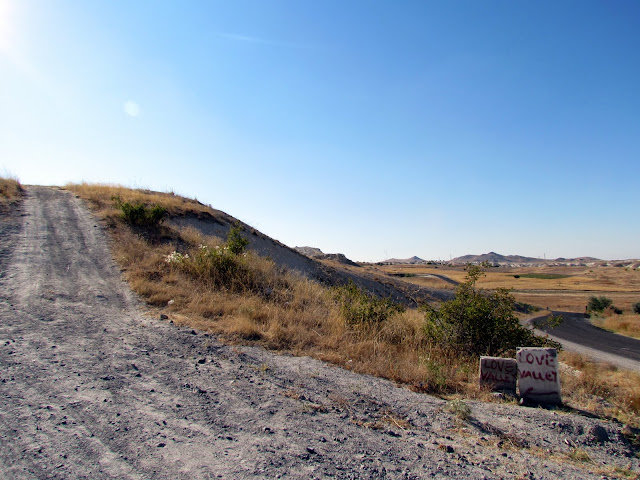 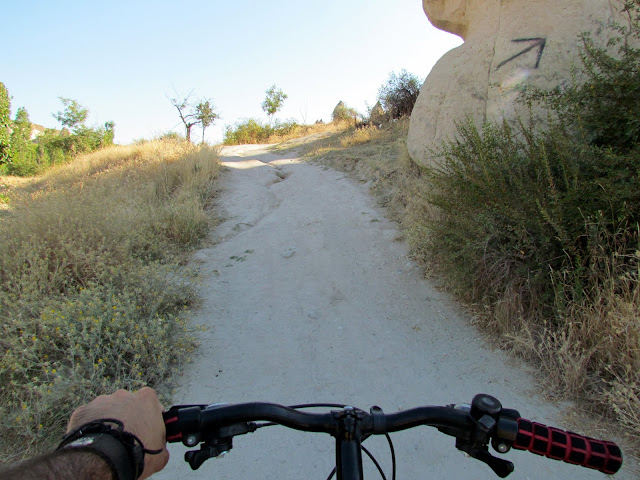 And finally, it all opened for me! I found the cocks! A valley full of phallic symbols — all natural — all carved by nature itself! 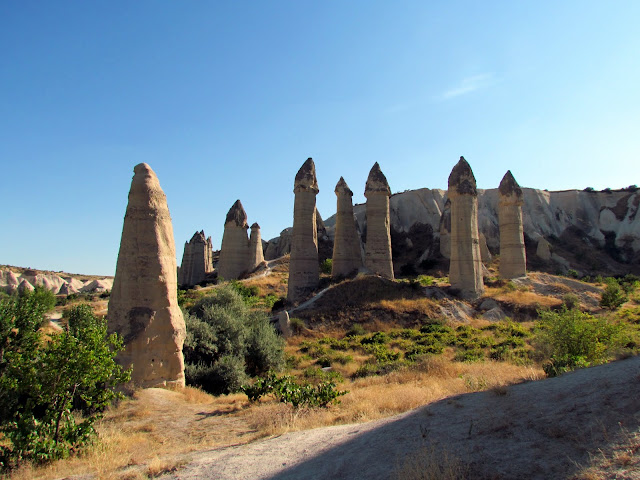 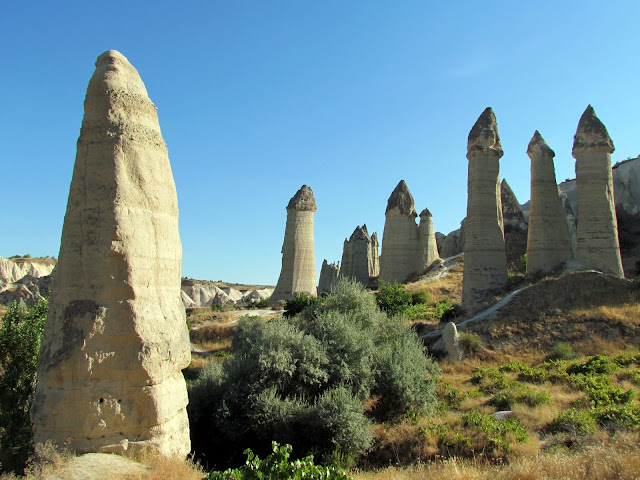 I looked around and realized that I was literally surrounded by all sorts of them! 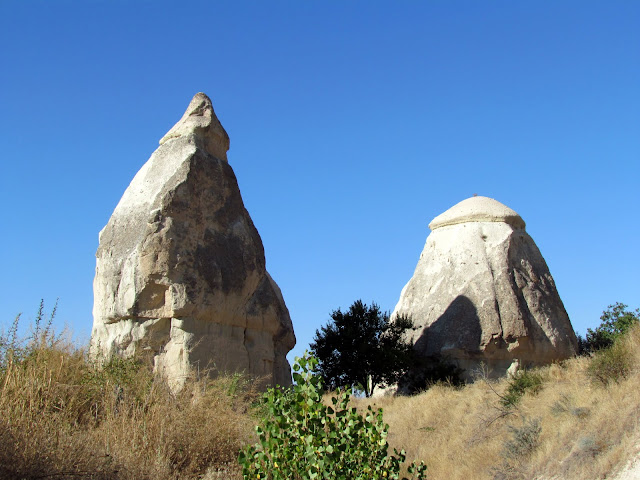 Some surrounded with trees… and bushes! 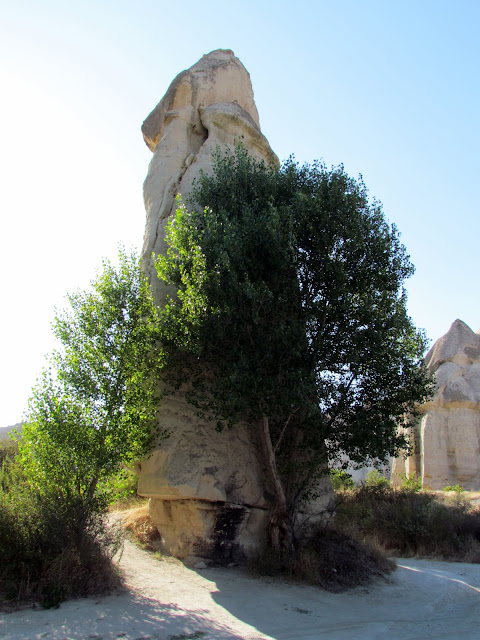 And just as I zoomed in to get a close–up, I noticed a girl who was chilling under the shadow. 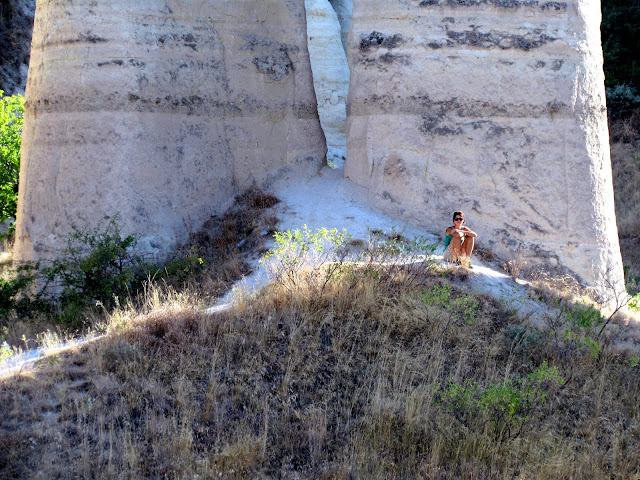 She was with her boyfriend, and unfortunately did not speak any English. They were a very friendly Italian couple traveling in an old Volkswagen minivan. Her boyfriend’s English, was, however pretty decent. After exchanging some words, he offered me to take me back to town in his van so that I wouldn’t have to ride it all the way, and I gladly agreed — I love chances to get to know new people! So the guy loaded my bike (and me) into the van and we took off.

After some chit–chat, jokes, conversations about the van and why the girl is not allowed to drive it because the gearbox is too gentle, we arrived back in Göreme and parted. 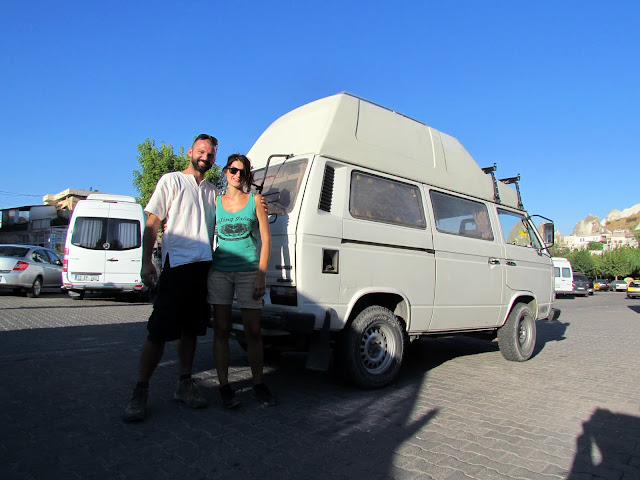 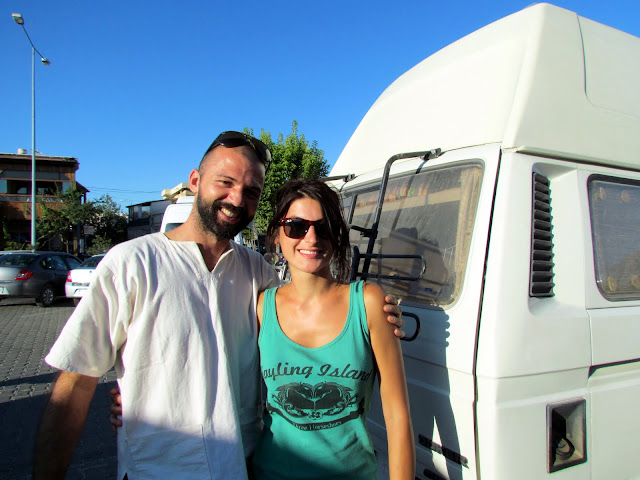 Aren’t they cute? I have a 10-minute video of our conversation in the van that I will upload once I have decent bandwidth — they are sweet!

So back in town, I went to look for a place to write the day’s impressions on my laptop, came across a coffee shop and asked the manager if they had a power outlet. The man looked somewhat aggressive, and instead of answering me asked the painful question — “Where are you from?”

Generally, in these situations I say that I am American. It makes me feel much safer. “I am American!” I exclaimed. “So, do you have a power outlet in this coffee shop?”

“But you are not American!” he answered.

“If you were American, you would first ask me how I’m doing!”

Suddenly he was interrupted by a nice female voice from behind me. The girl actually did sound American.

“But why not? He could be American! You probably just wanna ask about his origins!”

I looked back. A hot American babe was sitting by the window and having coffee.

“Where are you from?” I asked

I joined her table and we had the first conversation since my trip had started that actually made sense to me.  Traveling in Turkey for several months already, A. was a very attractive and straightforward person. I learned that she played scrabble and pool sometime and the way she said it was just drop-dead sweet. We talked for hours just about everything in life, from simple things to complex subjects, and then some gender discrimination, until the topic of sex emerged. She leaned towards me.

“You know, I wouldn’t say the Turkish men are very great at that stuff!” she whispered

“Yeah! They talk their way through, use their charms and everything, and then at the end when it comes down to doing stuff, it is nothing impressive!”

“Yeah! You lay there, and then you kinda wanna go like — is this all you’ve got? — Not knowing what to do with it!”

We tried to find some hidden relations between patriarchy and sex skills, and then somehow changed the subject. After it was really late, I walked her to her hotel but discovered on the way that I had left my phone at the cafe. We exchanged contacts and parted there, then I went and found my phone, and back in my hotel an email was waiting for me in my inbox. Here is the full text, names abbreviated, published with the permission of A.

Areg, before you start blogging about my romantic experiences (or lack thereof) here in Turkey, I want to clarify: penis size was not an issue! In fact, my liason in K. had a very nice cock (as big as these here in Cappadocia. lol) but was quite mechanical and lacking in passion. Chalk it up to the fact that he was a Virgo or, perhaps just a lack of chemistry. Nevertheless, that was what I meant by “not knowing what to do with it.” I would hate for you to put it out there in the blogosphere that Turkish men have small penises. Quite a dangerous proposition for an Armenian on a motorcyle tooling around the Turkish countryside! 😉

Hope you retrieved your phone!

And so ended the day that shall always remain a day of cocks to me. Amen!