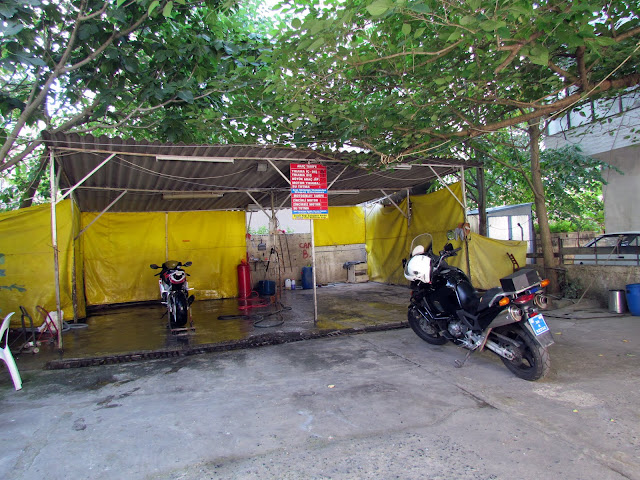 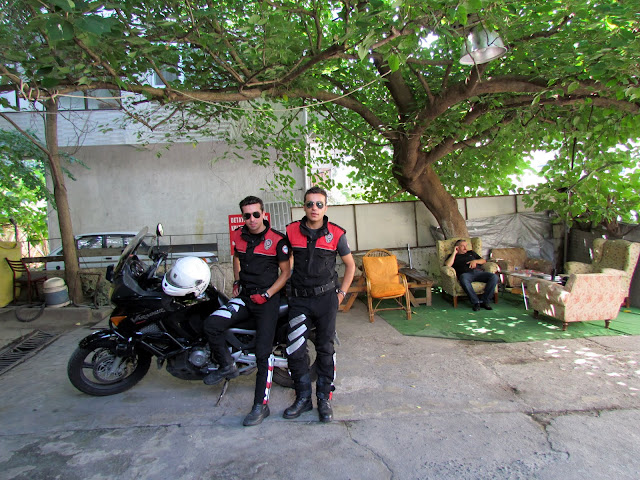 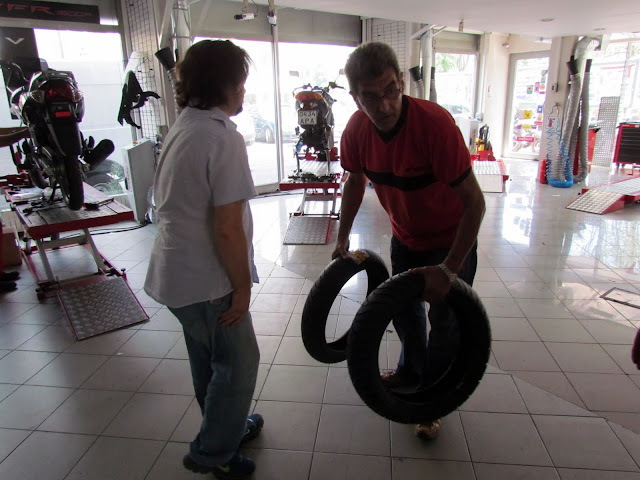 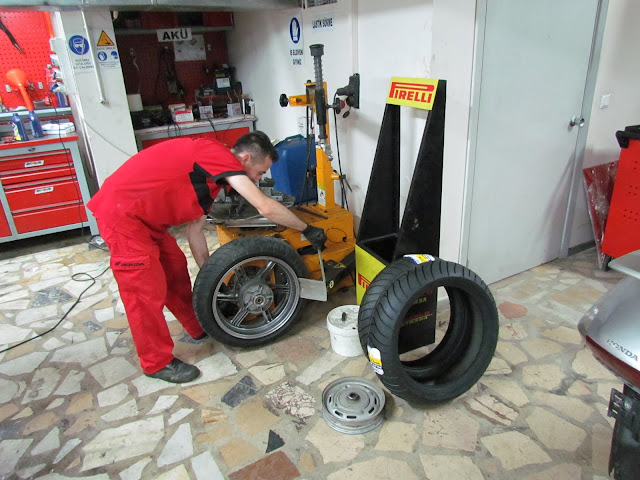 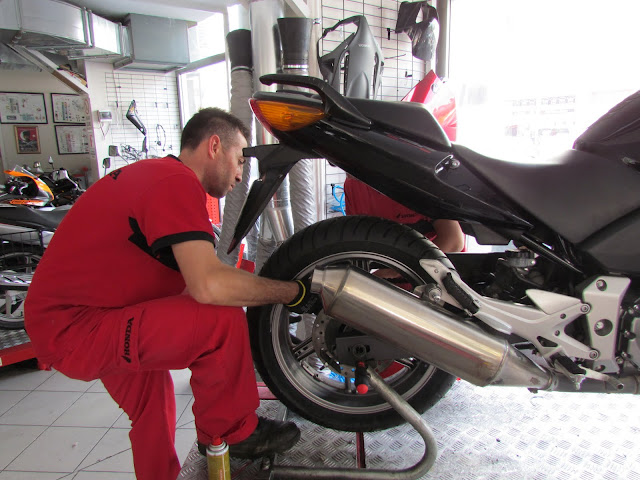 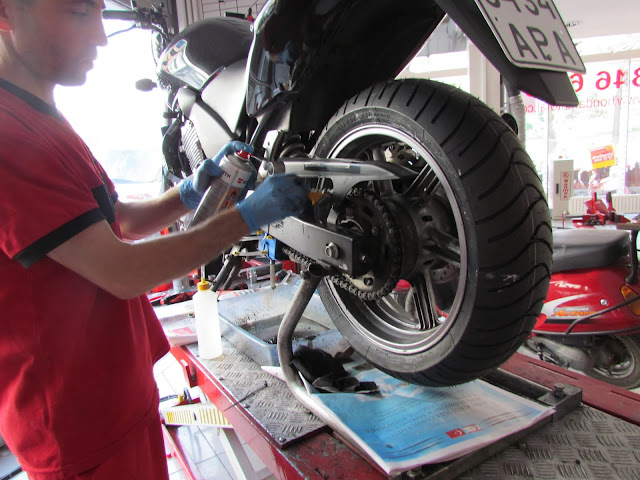 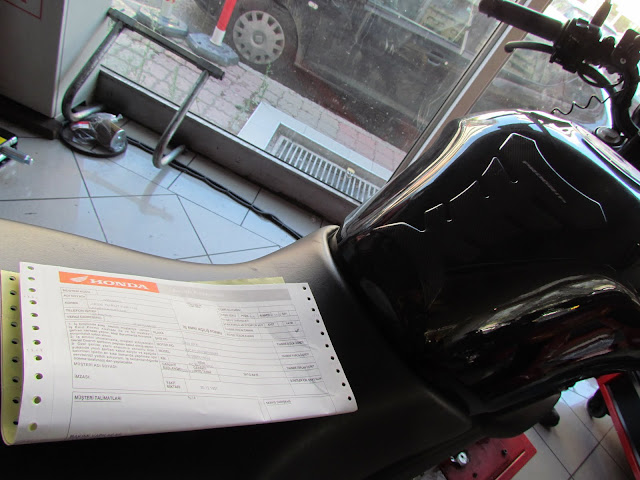 As I was talking on the phone with Honda Road Assist, some man in his 50ies was attentively listening me speak. After I hung up, he inquired what the problem was. I explained that I could not afford to pay 1600 dollars to repair my motorcycle in Istanbul, and that I had no idea what I was gonna do after getting there. “I have friends who operate a Honda-authorized repair store,” he said. “In the same quarter as my house in Istanbul. They will do it for cheap. Very cheap. Economic!”

He called his friends and asked them to call me to arrange our meeting once I arrive in Istanbul. I received a call after a minute. Luckily the guy spoke English.

“Yes, I am the guy with the motorcycle problem”

“When will you be in Istanbul?”

“Tomorrow in the morning”

“Tamam! Please record my number. Call me when you arrive in the bus station. We are in Harem. In Istanbul there is an Asian part and a European part. We are in the Asian part. Do not cross the bridge to the European part, or it will be very expensive to bring you back.”

That sounded hopeful. “Saying “not at all” to a “thank you” is so old-school”, crossed my mind, but overall I was certainly very happy. I had a number I could call in Istanbul! I thanked the man who arranged the contact for me and asked who he was.

“My name is Hakan.” He passed me his business card

“Pleasure to meet you, sir. Are you the manager here?”

“Call me if you have problems in Istanbul!”

I left the otel and figured I wanna do some sightseeing before leaving to Istanbul. This later turned to be the most stupid decision, and helped me adopt a new general rule when traveling on a motorcycle — if you have any problems with the motorcycle, do not do anything else before making sure everything is OK.

So I went to take pictures of the mosque in the center. In the outside it looked pretty Armenian. I am not an architecture whiz, so I took some photos to check later with more competent folks. 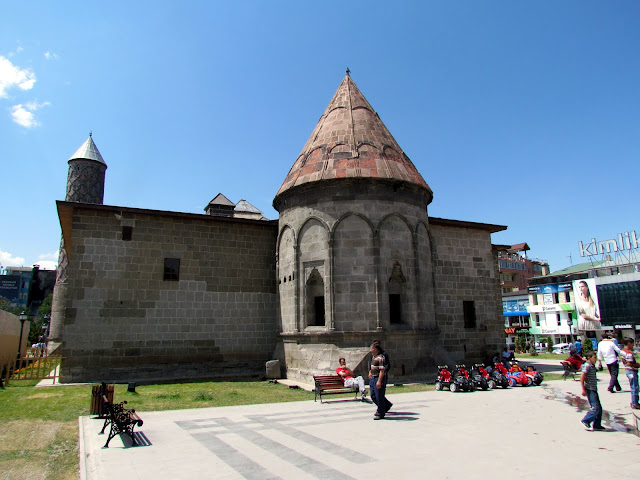 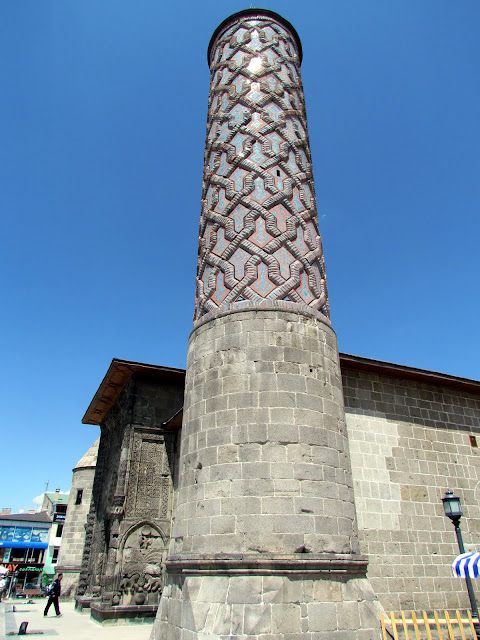 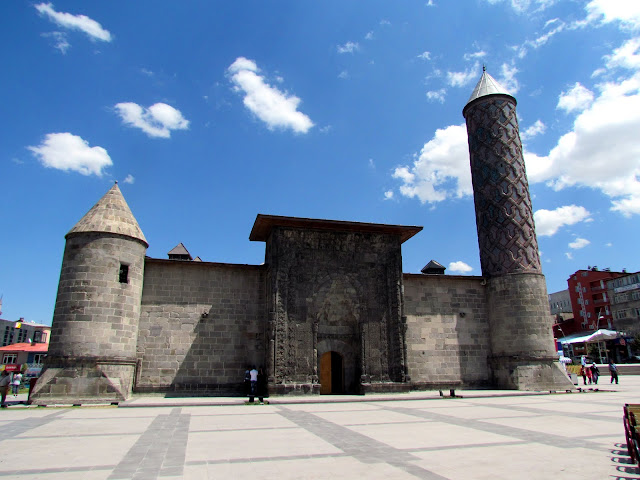 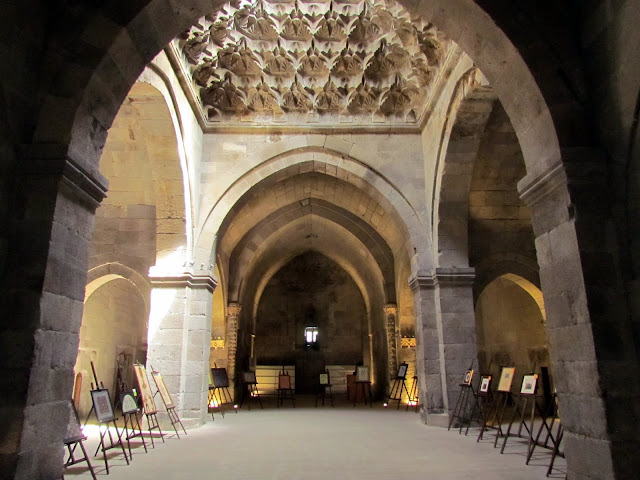 After the mosque I bought some cherry ice-cream from a store and started eating it right there in the street. I guess my behavior was very wrong for Ramazan, because I felt very much like a lady in Yerevan who smokes while walking in the street. My Armenian readers will know exactly what that means. Then I took some more pictures to give a general idea of what life in Erzurum is like. 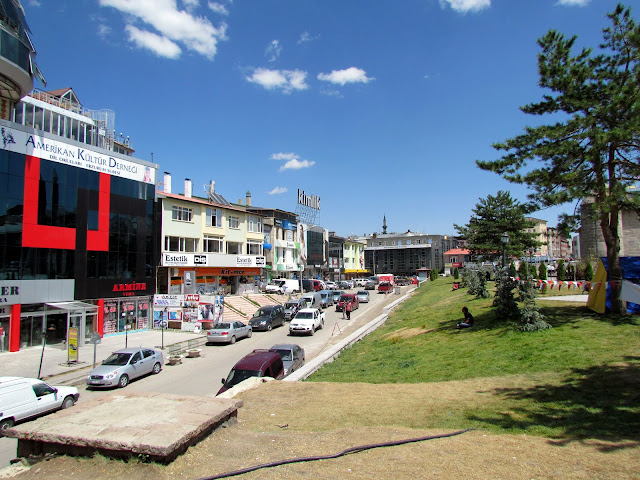 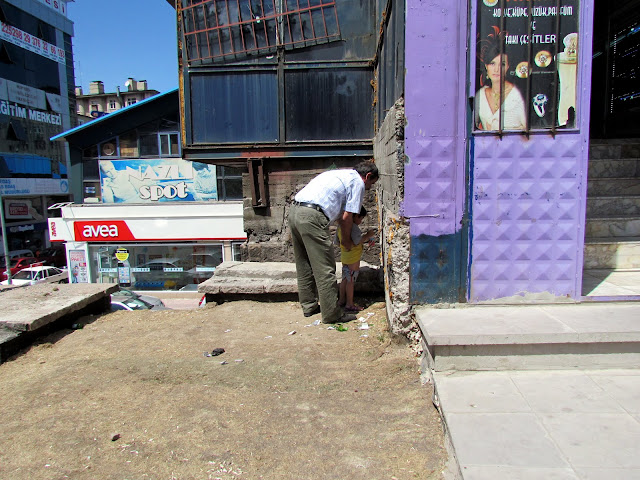 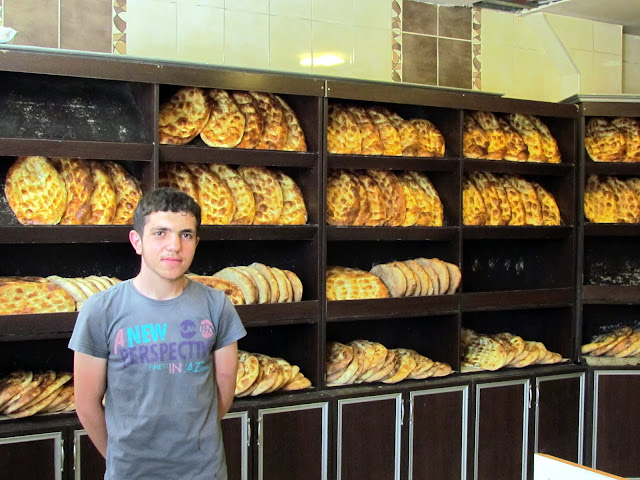 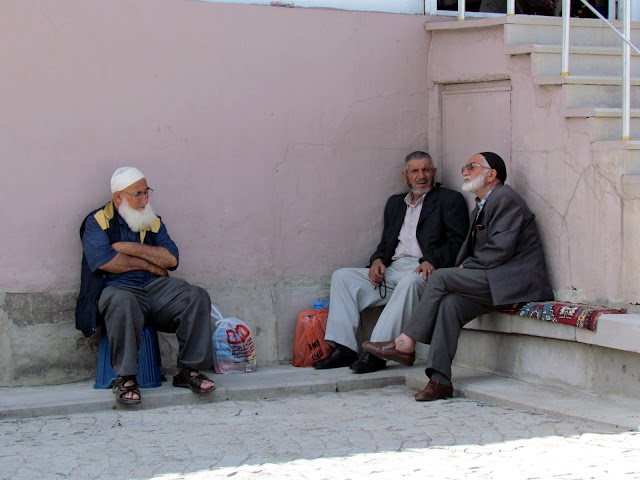 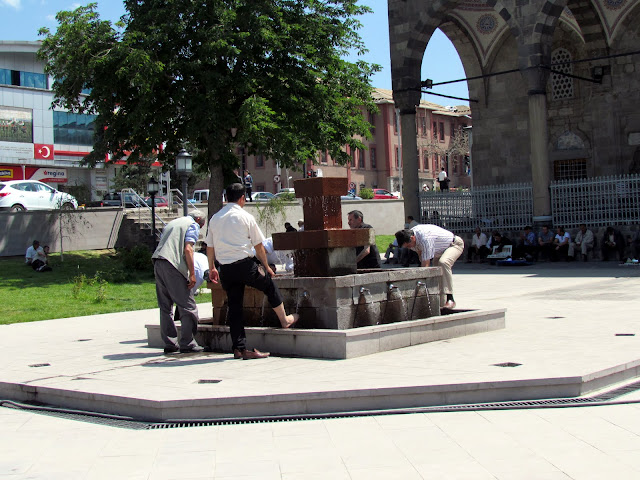 When I went back to the “otopark” to take my motorcycle to the bus-station, a surprise awaited me. Outside Cengiz’s booth there was a police motorcycle, a Honda CBF600! 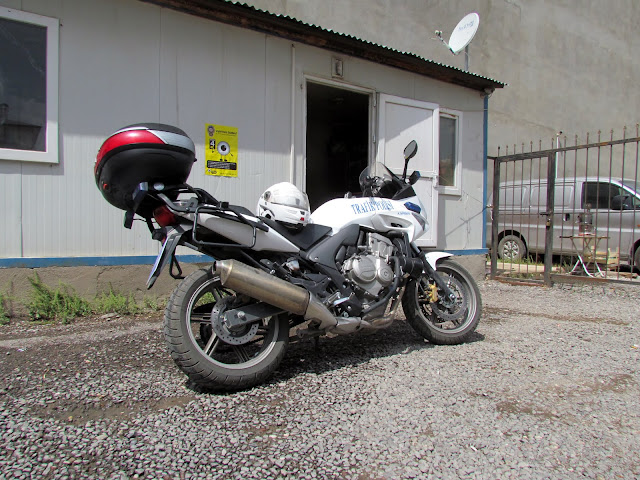 Turned out Cengiz had seeked out some policeman who was riding a CBF and was eager to help a fellow motorcyclist in trouble. His name was Mehmet. An extraordinarily positive person who looked and acted much like a superhero from a cartoon, Mehmet was excited for the chance to help me. He checked the motorcycle’s damage and threw his hand. “You only need to repair the throttle grip, then you can continue your journey.” 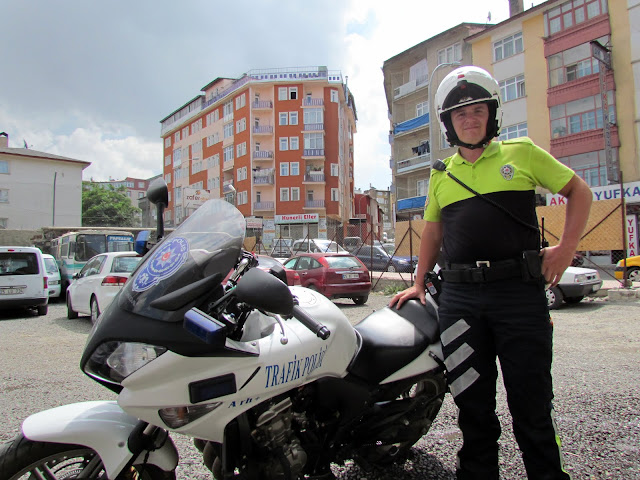 He called someone in Istanbul. “Will cost you 90 liras. About 60 dollars. When you go to Istanbul, call this guy,” he passed me a business card. “Mototal. Aslan bey. He always repairs my Hondas. Good usta! Very economic!” Then he checked the damages again. “Maybe you can even repair your grip here in Erzurum! Come!”

We took Cenghiz’s Peugeot and they drove me to some places. The “usta”s said they could repair the motorcycle, but only if they had the part.

“How does the Police repair their CBFs then?”

“Ankara! We put them on a truck and send them to Ankara or Istanbul! It is best for you to go to Istanbul!”

Mahmet sat me in a car, started my motorcycle and rode it fast with the broken grip to the bus station. I came in the car. By the time I arrived, Mahmet was already there, looking disappointed. “Yarın, Yarın!” he yelled before I even managed to get out of the car. “Yarın! The bus left! And we can’t take the bike back to otopark because we had to empty the tank. You will leave tomorrow!”

He approached a police station near the bus terminal and exchanged some words with the policemen there. “Lets leave your bike here in this station,” he suggested. “You can do that. Then tomorrow you just come here, take your motorcycle and go to Istanbul.” 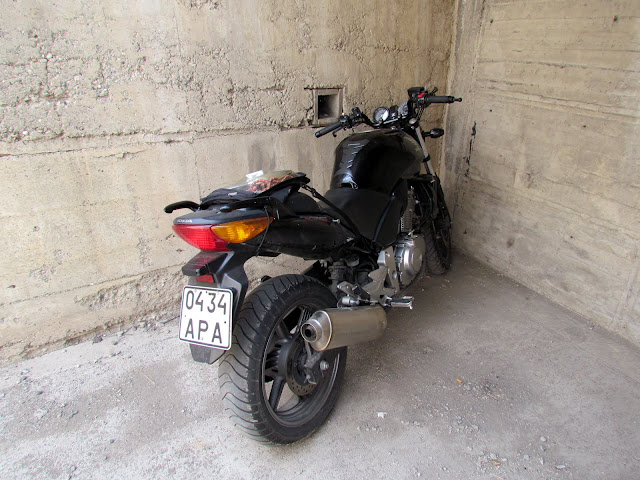 They drove me back to KRAL Otel and I checked in again. “Like yesterday?” I asked about the price. “Yes, 70 liras” nodded the receptionist. I wanted to say “OK”, but remembered Uğur.