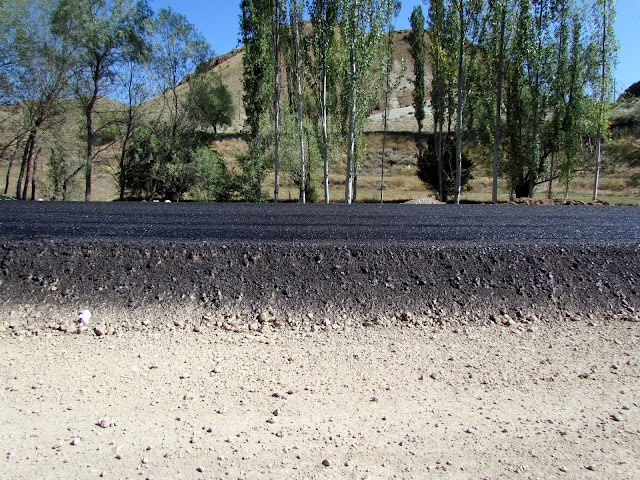 Had an extremely rich day. Crossed two borders, arrived in Ardahan and solved some important logistics issues today. Satisfied and excited about riding to Erzurum tomorrow.

In the morning in Gyumri I did meet the BMW riders during breakfast. Despite the license plate being Italian, the riders themselves were Greek and their destination was Yerevan. Our talk was short but useful, as they gave me valuable information about road conditions in Georgia and Turkey as well as an excellent tip on the relationship between speeding foreign motorcyclists and Turkish policemen. As we were parting, they asked:

“Are you riding the trip on that Honda by yourself?”

I grinned. “Your machine is such an overkill for the trip you’re taking” crossed my mind, but I kept it to myself. We checked out of the terrific hotel, purchased a USB cable and some medicine and headed out to the border.

Now if you are a motorcyclist who happened to arrive here doing a search on border crossing between Georgia, Turkey and Armenia then here’s a tip for you — border crossing is quick! You will hardly spend more that 20 minutes on the checkpoints. I rode into Georgia, refueled at Chevron (why don’t we have Chevron fuel in Armenia?), and rode to find someone on the road who could help me find directions to Akhalkalaki and Akhaltshkhe. Shortly I came across a police car that had pulled someone over. I stopped by their car and one of them approached me, realizing I wanna ask something.

“Yes please, I need to find the border crossing with Turkey at Posof.”

“You’re going to Turkey? You’ll need to turn left at the next intersection then keep going straight all the way to Akhaltskhe. About 70 kilometers, then you will see the signs.”

“Are you from Armenia?”

“And you’re going to Turkey?”

“You are brave! Good luck, brother!”

I grinned again and rode off. By the way, I would be an asshole if I didn’t mention that both policemen were extremely nice, polite, helpful, eager to help and charismatic. Our own policemen have a long way to go to get there.

After a some riding across Georgian towns with a lot of Armenian markings, captions and labels, I arrived at Posof border crossing. Huge Turkish flags, everyone acted extremely professional and there was this feeling after Georgia of somehow entering Europe. I approached the security official stamping the passports and used the only Turkish word that I know:

That kinda stunned me for a second. He then asked me if I have international insurance. Finding out that I do not, he called someone and asked me to sign some papers, printing out an insurance form for me. Cost me 15 liras and I was happy I didn’t get one back in Yerevan — would probably cost me an arm and a leg. And so I drove off — Turkey! 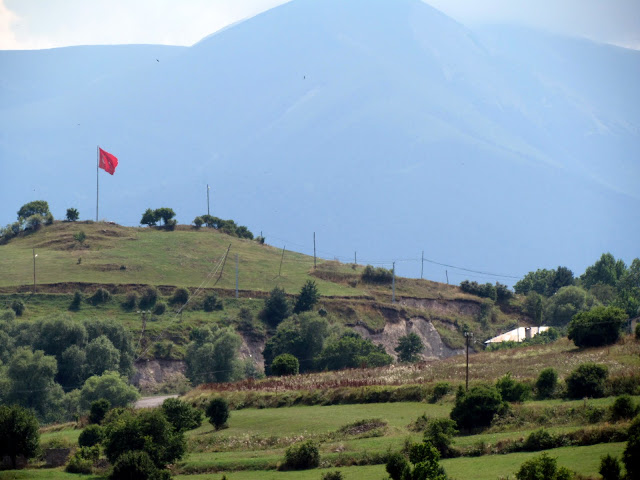 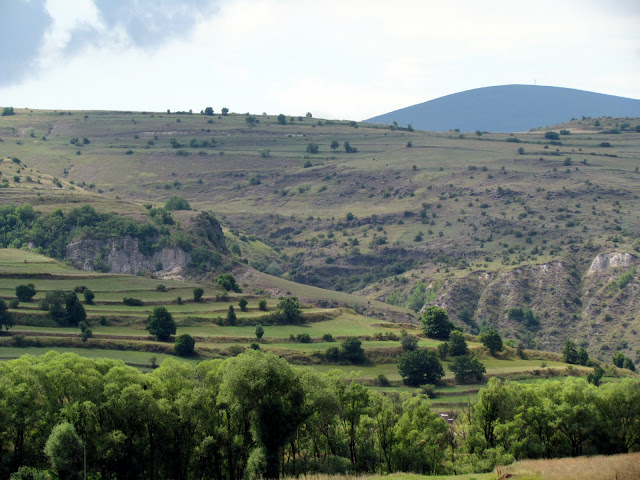 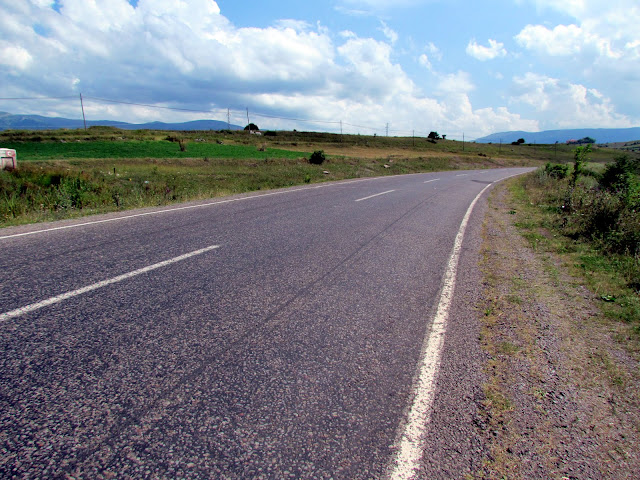 The roads are totally Europe. There is generally always a flag in a visible range. The cars obey the speed limits most of the time. Towns are really underdeveloped, however, strangely enough, mechanization level is fairly high.

Road signs and license plates are almost identical to those in Europe. Direction signs are everywhere and navigating is easy. A bewildering experience were the truck drivers — if they see a motorcyclist in the mirror, they give you a hand sign of when to hold behind them for an incoming car and when it is actually safe to pass. Very nice for any motorcyclist, as we know the pain passing over a truck can be on a curvy road.

After about 80 kilometers, I arrived in Ardahan.

A very oriental city, kinda underdeveloped. Does not really compare to any city in Armenia. Mugham in the streets, streets are kinda dirty, almost all women wear hijabs, town center looks like some 3rd rank square in Bangladesh, Yerevan. Obviously not big on tourism. All roads are strangely made of cobblestone. 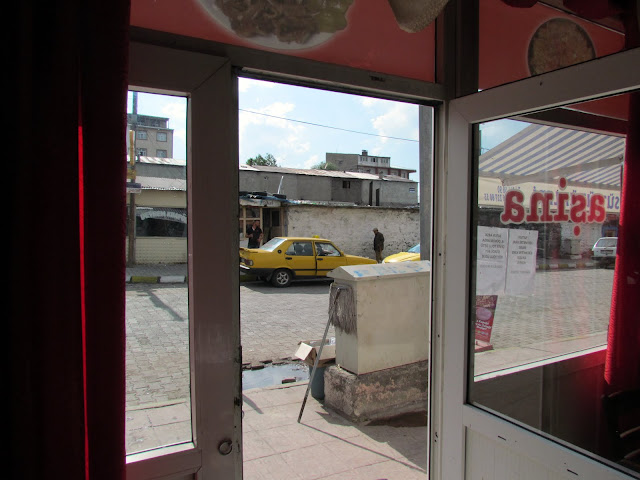 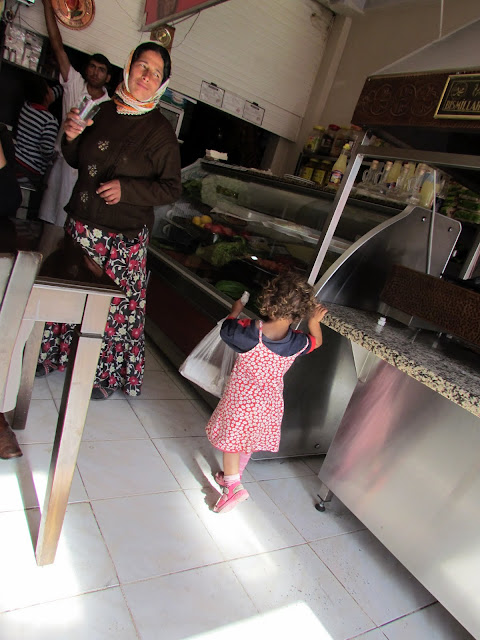 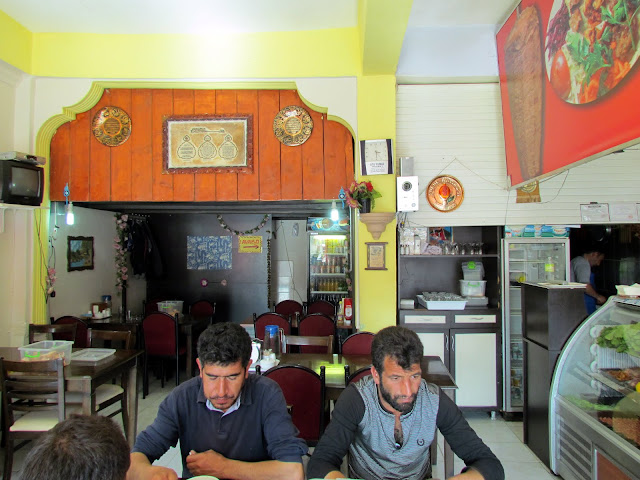 I checked into some really crappy hotel for 50 liras per night (I think it was the best in town) and went to eat something. What do you eat in Turkey? That’s right, kebab!! All sorts of them! 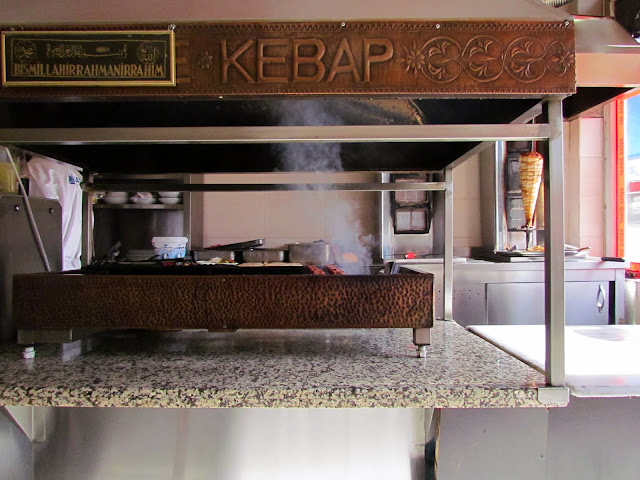 The way these people prepare meat here is absolutely stunning. I have realized that this journey is gonna be journey about food. 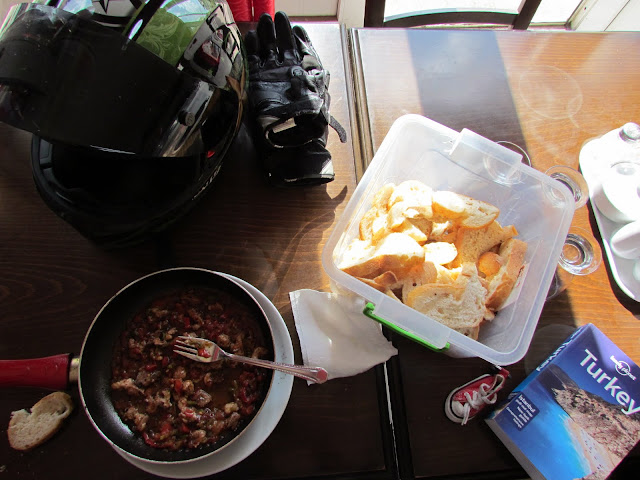 Not only is meat delicious, they also serve you unlimited amount of wonderfully baked white bread. At 10 liras (about $6,00) you have absolutely no way of staying hungry. 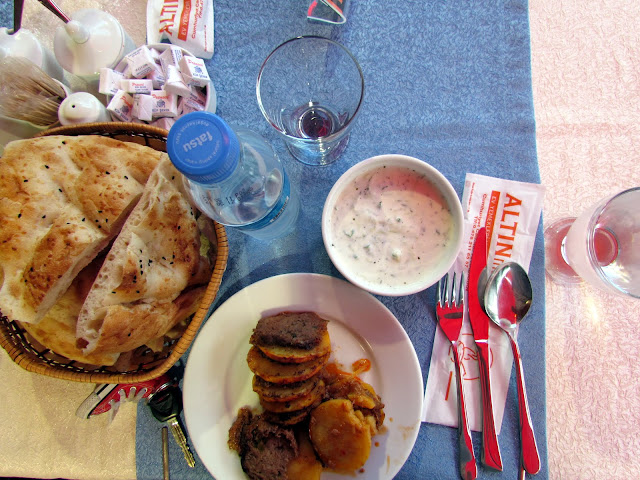 Besides the food, Ardahan is pretty boring and underdeveloped. The hotel is junk: they have WiFi but they do not have hot water until after 9:30. Absolutely nobody speaks English, or anything other than Turkish for that matter. While buying my Turkcell SIM card and configuring my 3G, had to use Google Translate to communicate. 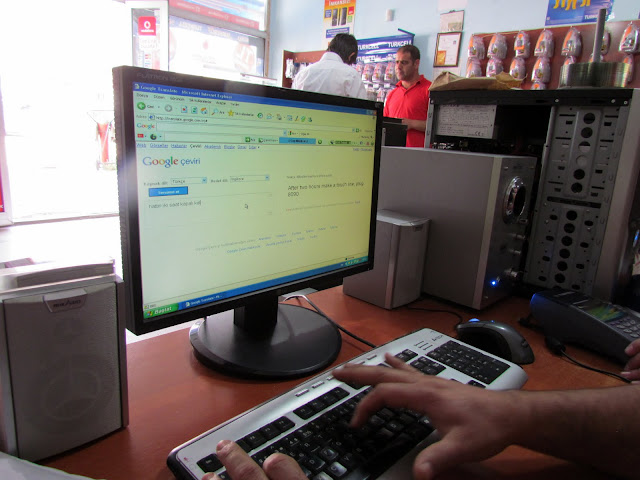 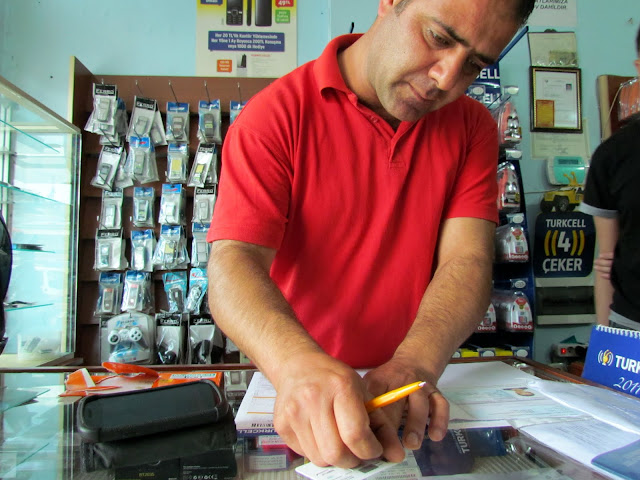 One of the ladies at Turkcell asked a lot of questions about the trip using Google Translate. Finding out that I was heading to Istanbul, she inputted something in Turkish that translated into: “Will you have me?” I presumed it was a Google algorithm error, smiled and walked out. 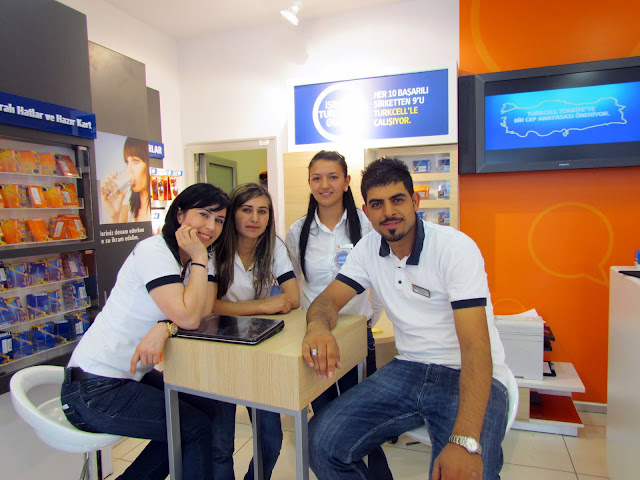 She’s the second from the left. The guy’s name was Murad, he helped configure my 3G while I was talking with the lady.

Make no mistake with the girls asking you to have them on Google Translate though. Ardahan is extremely boring, no couples and no fun going on. A very typical oriental town. You don’t wanna live there. 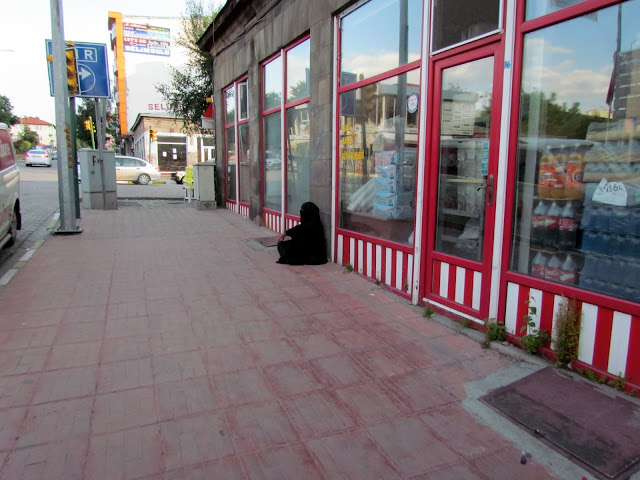 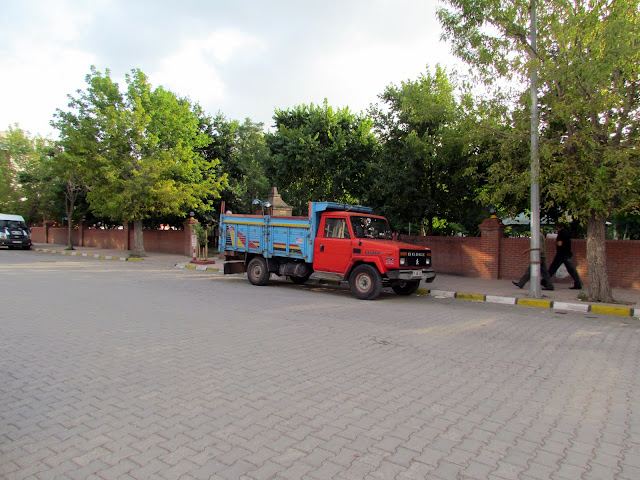 There is a some architecture and details that remind of Armenia. 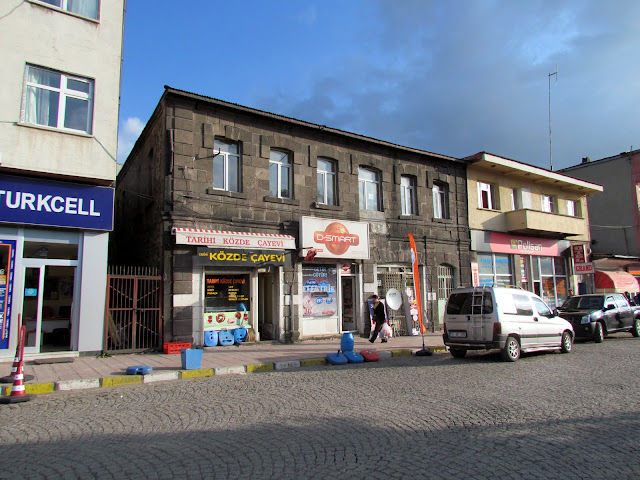 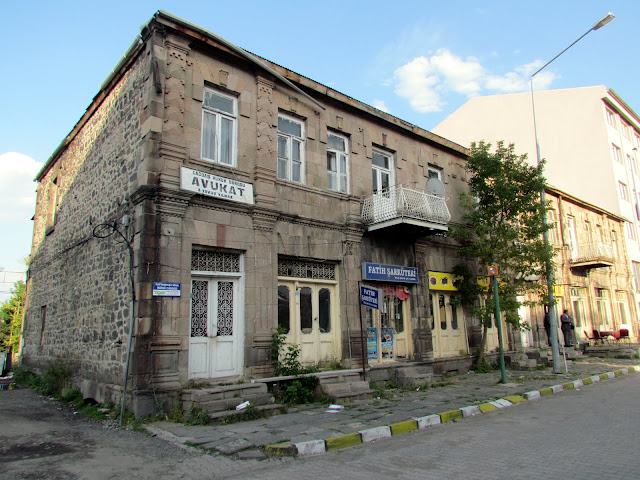 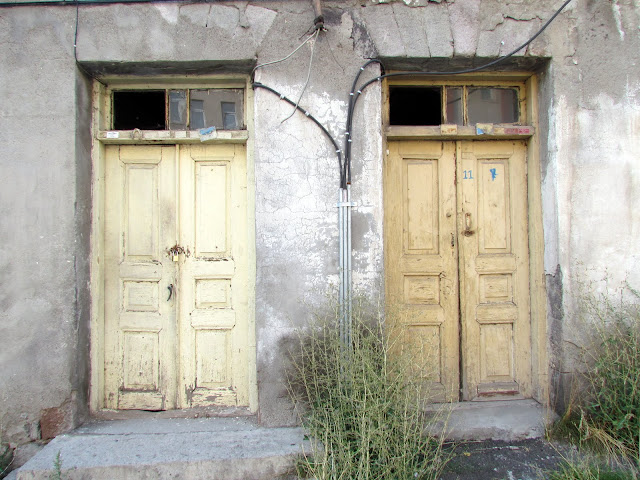 Erzurum tomorrow, that is 239km. Hopefully Erzurum will be more exciting than Ardahan. For now, park yapılmaz! 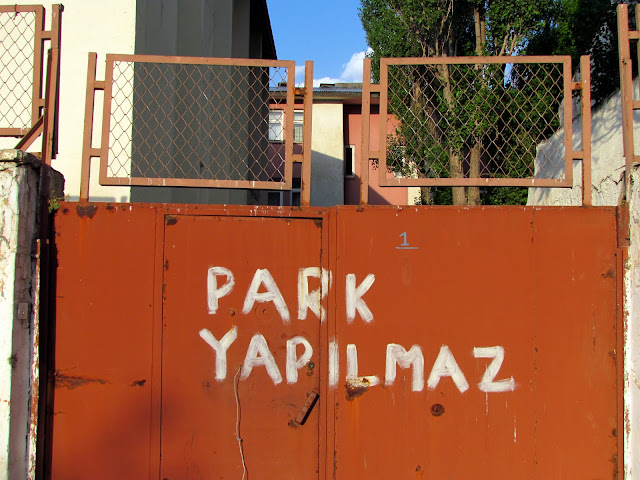