Even if you buy a brand new motorcycle and drive it off the stand from the official dealer store, sooner or later it will require a good wash. Even if you are that one lucky rider who has never been caught riding under the rain during the last 25 seasons, even if your garage is more sterile than the 8th Hospital in Zeytun (hey it’s totally feasible!), and even if you take a shower every time before saddling it, if you’re riding it you’ll get it dirty (no pun intended).

Moreover, if you just love doing it in dirt and gravel, the need to wash it will rise a lot more often than if you’re one of those cafe racer dudes with a Fireblade. 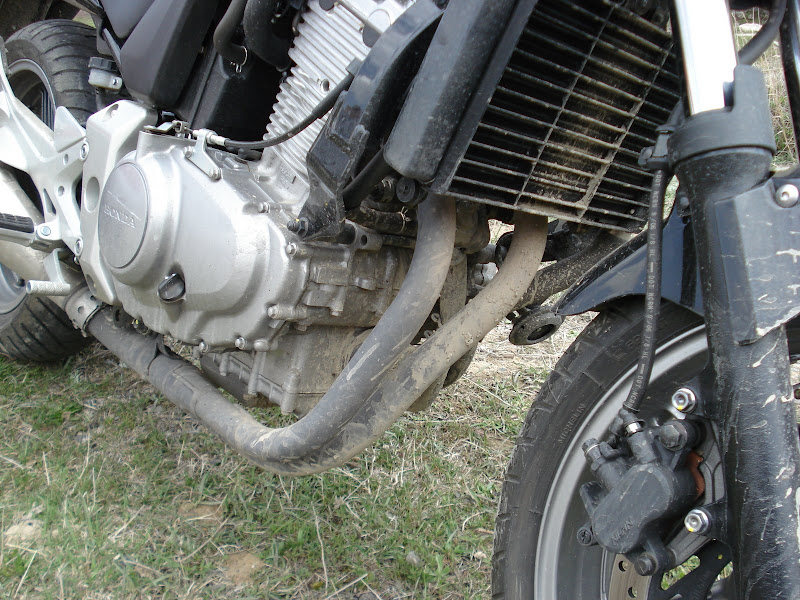 And by often I mean pretty damn often.

So what do you do when the time comes? You know, when the rear suspension doesn’t work anymore because of all the dirt, the leather saddle and the handlebar grips conveniently stick to your pants and gloves like a candy, the turn signal button no longer works because of all the sand around, the mirrors show a blurred vision of a drunk person distantly resembling the reality behind you and she suddenly comes up with all these different reasons why she does not want to ride today? From that point (as well as from any ride that is more than 300km in Armenia) you have two options.

Wash your motorcycle. Get some water running (better warm than cold), some dishwashing liquid detergent, a sponge and a bucket.

One thing to keep in mind is, do not direct high-pressure water on the carburetor, the front fork suspension rings or the engine radiator. These parts can easily be damaged by that.

Have someone else wash your motorcycle. Many riders are feeling very strongly against someone else washing the motorcycle. Moreover, there is a shared belief that washing the motorcycle at a commercial no-contact car wash (aka “Karcher”) will damage some parts because of the extremely high-pressure water and air. However, in reality things are not so grim, if you take necessary precautions and warn the washer about some specifics. 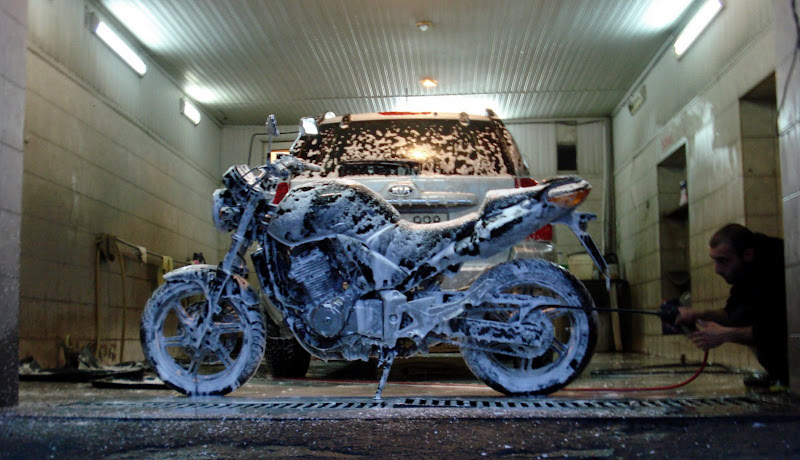 Warn the fellow to not direct the stream of water at the radiator, the carburetor and the front fork UNDER ANY CIRCUMSTANCES and always stay to supervise what’s he doing. Then pay your 2000 drams and get done with it.

I am personally going to this typical Yerevan car wash in a yard at Grigor Lusavorich street where a guy named Galoust (he’s in the photo above) has become my own personal bike washing expert. Here is where the place is located:

I think these series will contain some interesting aspects for people who are not yet into motorcycling as well as those who already ride, as you will probably find similarities.

So when I did not have a motorcycle yet (and did not make any sense in the types of motorbikes), my vision of a motorcycle was that of a sportbike. Of course I knew the cruisers (I ignorantly called them ‘Harleys’) and I knew the classic bikes and I had a very small knowledge of the offroad motorcycles which I hated, but if I would be shown different types of bikes and had to point my finger at the one I thought was coolest, it would definitely be the alienish designed sexy sportbike. And no wonder, because I knew they were fast and when you don’t actually ride, motorcycling feels all about speed.

However, back then I could not just simply buy the bike I wanted (not even the class of the bike I wanted!), and the circumstances brought me a small Honda cruiser — the excellent Honda Rebel CA125. I learned to ride on it and travelled a lot, falling in love with my small cute chopper that felt so big on the first day it was brought to my garage from Vedi.

At first I was pretty unhappy with riding a cruiser, but it has slowly revealed a whole new dimension of motorcycling to me that I could never discover otherwise. I started to feel that motorcycling was not really as much about speeding as it was about the philosophy of riding, the philosophy of control, some danger, adventuring, freedom, freedom and freedom. I think this was very good for my motorcycling experience as a whole, because I figured that the pleasure of motorcycling was much richer and bigger than that of speeding in the open air, becoming forever ‘whacked by the motorcycling bug’. However low in its CCs, the Rebel was great at injecting these concepts into my body and soul (changing it permanently) and after a couple of seasons I realized I’m a cruiser type of a guy. You know when you’re a teenager you wanna choose and stick with one thing, easily labeling yourself and the others! Having ‘found’ myself, I did not expect this would change, but it was a juvenile thing to think!

One significant future-changing permanent impact that the Rebel had left on me though was my huge and long-lasting love affair with Honda. I was amazed by the engineering talent put behind my small machine and the quality of production was just astounding! I knew since that all my future motorcycles were going to be a Honda, and this determination is alive to this day.

It still touches my heart when someone talks positively about Honda, and I am ready to engage in an endless debate with the ‘R1 is better than Fireblade‘ type of fellows having Honda’s bulletproof ‘gearbox’ argument in my arsenal.

So the first major battle inside my head after starting riding was won by the cruisers, and I already knew I was not going to own a sportbike in a very long period of time. The cruisers felt way cooler, very attractive and stylish with an enormous spirit about themselves, and the rumbling of the engine was so addictive that I didn’t understand anyone who wanted to ride anything else. So my dream motorcycle at the time became Honda Shadow — Honda’s flagship cruiser.