Brad Pitt rides a beautiful custom chopper. How cool is that?

The bold front wheel and the handlebar of this cruiser make it such a sexy eye–catcher. Now to find an equally stylish helmet, that could prove difficult!

I’ve redesigned the blog. It is now simpler, slicker, sexier, smoother and more functional at the same time. It now features a sophisticated map which has a programmed ability to show my location live during the long journeys (of which I’ll be speaking extensively), tweets streaming straight into the posts list, all sorts of fancy social media sharing tools,  but most importantly — the new colors match the design of my awesome helmet!

Fact: No traveler has a map as cool as the one on the new One Hell of a Ride. Seriously. 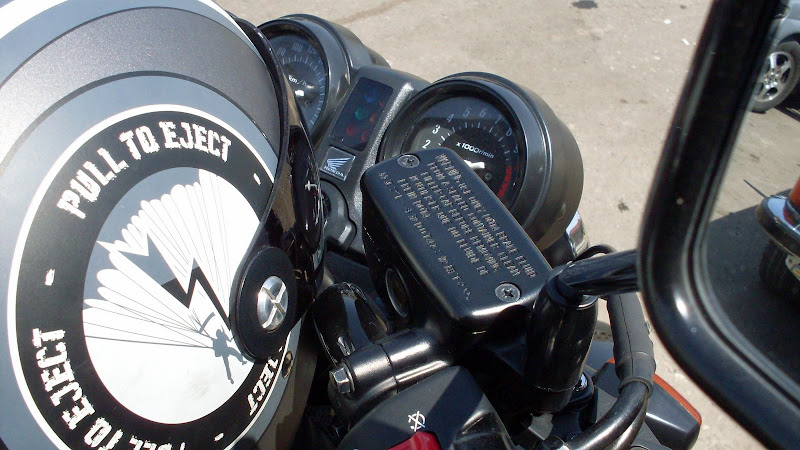 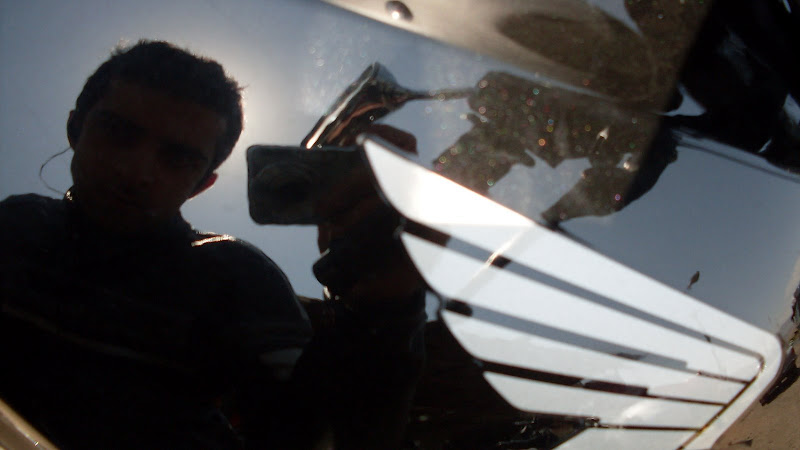 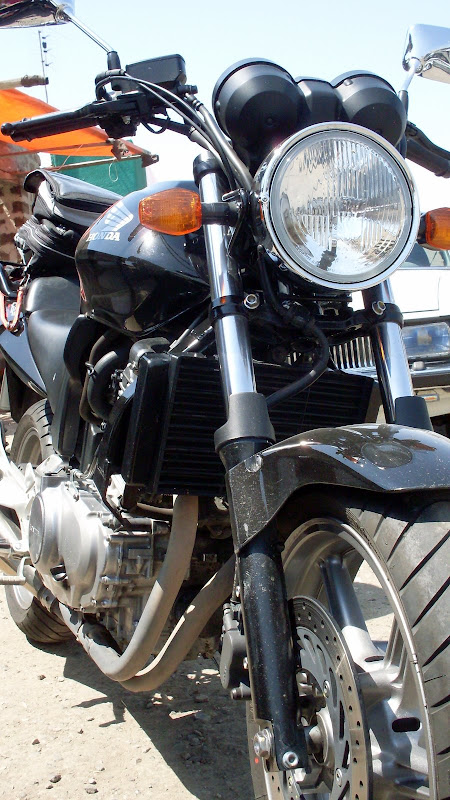 Armenians are proud people. We are proud with a reason and without. We are proud of our budding democracy, of our chess team, and, above all, of our history. We like to mention that once upon a time our country spanned from sea to shining sea and that we were the first nation to adopt Christianity as its official religion.

This little episode occurred in 301 AD: 12 years before Christianity was even legal in Rome. This change of religion was catalyzed by St. Gregory the Illuminator, now the patron saint of Armenia, curing then-pagan king Tiridates III of insanity, into which he had lapsed after torturing and killing a group of virgin Christian nuns. However, prior to this St. Gregory was imprisoned for 13 years in a deep pit (khor virap) by the same Tiridates III for being the son of his father’s enemy.

So every child educated in Armenia gets this history lesson, but not all of them get to see the actual pit. I had not until very recently. The virap has had a small chapel built over it since the days of St. Gregory, which is now a part of a monastery complex, situated in the Ararat plain, amid vineyards and orchards.

It was a rather short ride from the city, 30 minutes or so, on a boring straight road that didn’t give you much to look at, other than an occasional shanty roughly put together out of metal scraps in the middle of a fruit garden, where a family was laboring together hunched over the earth. The more boring and straighter the road, the more likely you are to speed though, so the highlight of the ride was the roar of the engine, the warm wind in my face, and the meditative state into which I lapse at high speeds. On the other hand, the last short section of the drive up to the Khor Virap monastery was extraordinarily picturesque, one so familiar and dear to the hearts of all Armenians: a church perched on the top of a steep hill with the snow-white Ararat hovering majestically in the back.

The first thing that struck me about the church was I guess the usual sight at most churches in Armenia on a weekend: the wedding conveyer.  One somber couple followed the other into the church where the no less somber priest performed the rites and pronounced them united in the eyes of God, after which the couple was free to go and pose for pictures in the yard. And so there was always one couple getting nervous, stepping from one foot to the other in the church doorway, another couple at the altar, and the third looking at the cameras soberly, gravely, as if trying to understand the philosophical repercussions of “in sickness and in health”.

The brides’ mothers looked fussy as they arranged their daughters’ veils clumsily and gave them advices as to how to look their best in these pictures that immortalized the most important day of their lives. Maids of honor tried to present themselves to their best advantage in front of the grooms’ friends. Little girls in white dresses spun around and twirled their taffeta skirts in the church yard, looking dreamily at the brides, hoping that one day they will be marrying their own solemn-looking prince charming. But for now, at least they got the dress all ready…

The main church, St. Astvatsatsin, built in the 17th century, was rather typical, as far as Armenian churches are concerned, built out of smooth orange tufa stone. It sat in the middle of the courtyard contrasted by the rough-hewn stone walls around the whole complex. The back wall of the church was covered in inscriptions: mostly names and dates, some going as far back as 1920’s, making the sense of permanence and continuity real, touchable.

The St. Gregory chapel was smaller, simpler, rougher, the inside walls covered with soot, housing the pit that served as St. Gregory’s home and prison for 13 years. We parked the motorcycle helmets by the altar, hoping that no one would steal from a church, and descended into the pit. The vertical ladder just kept going and going and I started to wonder just where I would find myself when my feet hit solid ground again, somewhat like Alice. The pit was dark, full of tourists, and claustrophobic. I guess those pagan kings back in the day were not to be messed with. Couldn’t imagine someone being trapped there for years and years, without the sad-looking but efficient light bulb hanging lonely from the ceiling.

Inside St. Astvatsatsin numerous candles flickered in the breeze, as people whispered their secret wishes and most coveted dreams to the quivering flames, hoping that God will grant an answer to their prayers. 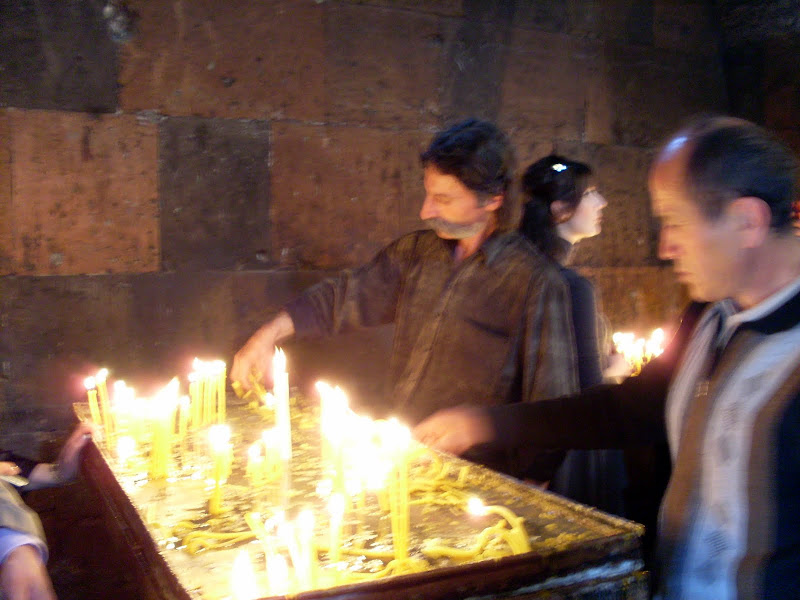 Outside the church there was a tribute to the Armenian pagan past: a cock was trotting around proudly, as a true Armenian cock would, still ignorant of the the highest purpose he was going to serve.

On the way back to the city we were bombing down the highway, going over 150 km/hr, probably the fastest that I have ridden on a bike (although I used to squeeze more out of my old Corolla), and the boyfriend’s medium-sized helmet was sliding back off my small-sized head, while trying to crack my neck in the process. The chin strap was digging in painfully, totally ruining this amazing experience of the world rushing past me at a (quite literally) breakneck speed. With all this sliding around that the helmet was doing , I realized that it was on my head just for placebo effect: I may have felt better about having my head protected, but it would probably not do much good during the meeting between my head and the pavement.

So the few lessons to be learned from this ride:

I have today ordered the helmet that was liked by most people among the available choices — the gray AGV Dragon. I thought I don’t see the helmet when wearing it anyway, so I might as well try and match it with the others’ taste!

I am expecting to have it shipped within two weeks. Let’s see how that rolls!

I’m planning my next wave of major purchases.

And I am going to kick it with a new helmet — I desperately need to change my current Lazer helmet.

Most importantly, it is already around 5 years old (and helms do need to be replaced every 3 years as they lose their protective capabilities); it’s a cruiser helmet (I want something more streetfigher-fitting with my CBF500) and it’s a Lazer (I want a better brand).

I contacted my dear local dealer and here are the options they offered:

My heart currently goes with the first option, as it looks very stylish to me (besides having a great pilot look!).. However I am not sure how would it actually look on my wonderful head, so at times the more conservative options number 3 and 4 look ‘safer’ to order.

Oh, and agv is awesome!